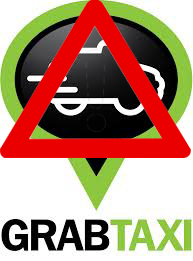 Lately, my daughters have been choosing to take a cab, instead of having the driver take them to work.

They’ve had nothing but glowing praises for two new services that can do the job as efficiently as my driver: Uber Taxi and Grab Taxi.

Being naturally curious and cynical, I decided to try pricey Uber and I gave it a 7 out of 10 points – merely because the promised Camry turned out to be a Vios.

A few hours ago, I grabbed my son for a bonding ramen lunch at Aura.

After a satisfying lunch, I got the inexplicable desire to try a Grab Taxi for size.

So my son ordered one on his iPhone and in 10 minutes we were on our way.

It was a horror story all the way to my house.

Never mind if the cab was quite messy and cramp.

More unforgivable was… the arrogant driver (with a thick Visayan accent) who was on the phone  from 12:30 PM until we reached our destination at 1:10 PM. 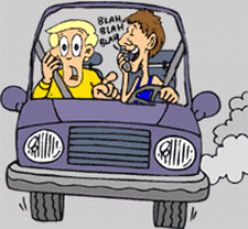 He was yakking on and on to his phone pal about the traffic… the difficulty in reaching the P850 boundary… about the cab owner’s expiring franchise… about family members fighting with each other. And so forth, and so on…

(If I stayed 30 minutes longer, I’m sure I’d get his opinion on why Binay should be elected… what days of the week he has sex with his wife or male lover… how often he moves his bowel… what his favorite color and motto were…)

He was weaving in and out of traffic like a possessed man. With great speed… without pausing from the seemingly riveting conversation.

I told him to turn off the phone… but I was apparently… voiceless. And invisible to him.

When I started giving out instructions as to where to pass, he shouted, “alam ko!”.

I wanted to lose my temper but I was with my son – a person so gentle and always humble – I simply didn’t have the heart to show the nasty side of me.

So I stayed cool.

While bearing the rudeness, I noticed that the taxicab had the emblems of Grab Taxi and another similar service Easy Taxi.

Which only meant that Grab Taxi was being careless – growing complacent with its word-of-mouth success: obviously no longer meticulously vetting, just saying “yes” to just about any taxicab that craved to be part of the Grab “network”.

So, at this stage of the game… the passion that came with the Grab success was just a memory.

Commerce was now in the driver’s seat.

I wanted the guards manning the gates of our village to arrest this jerk.

But with Paolo by my side, I let it slide.

On and on and on… until every future passenger of Grab Taxi takes extra precautions, instead of foolishly believing in the questionable word-of-mouth safety and efficiency of this service.

And that includes my daughters.